The Night Target, Charlie Sheen and I Became “Winners” on Twitter 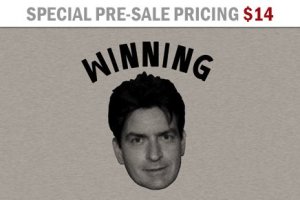 As I was checking my email this morning, I noticed that I gained ten followers on my Twitter.

Usually I gain 2-3 overnight, but ten was unusually high.

Although I tweeted some messages about “Glee”, “V” and Miami Heat the night before, there was nothing that I thought would increase my followers ten-fold.

Imagine my surprise when I saw retweeted message was not from the night before, but five days earlier.

About a week ago, when the Charlie Sheen story was more humorous than tragic, I sent out a tweet wondering if I could pick up Sheen’s now infamous “Tiger Blood” @Target.

Target picked up on the tweet and wrote a joke back to me.

I then wrote a tweet back to Target asking them the availability of Tiger Blood at their Dollar Spot.

After a few minutes, Target tweeted this message to me:

Target @kevinlockett Contrary to popular opinion, #TigerBlood is not available at the Dollar Spot. #Winning? On sale daily #ExpectMorePayLess

It was very funny tweet, but I didn’t retweet it.

I just thought how cool that whomever was running Target’s Twitter had a sense of humor. Also, by engaging in conversation, Target effectively branded themselves as a hip place to shop, which from marketing standpoint could create brand loyalty.

But how does tweet between Target and myself becomes retweeted over 30 times five days later?

Somewhere along the way Sheen (or someone running his Twitter page) found the message and retweeted it.

Why did he do it? Who knows, but by retweeting that message and keeping it on his Twitter stream, both Target and I benefited by gaining followers.

Having your message retweeted is like having a video goes viral. There’s no real formula to it.

Like any hit song, movie or TV show, retweeted messages and viral videos are dictated by the masses and if they like it, they will either retweet the message or post the links on Facebook, blogs, email, etc.

When people become viral video stars like the Double Rainbow Guy (aka Paul Vasquez), these video are not calculated moves to become successful.

Vasquez was an ordinary guy who was excited about seeing a double rainbow that he filmed it, uploaded the video on YouTube for his friends and family.

Somewhere along the way, the video was passed around to people outside his circle and boom the video becomes a viral phenomenon and he ends up starring in commercials for Windows Live Photo Gallery and a New Zealand commercial for Vodafone.

The reason why most viral “stars” are one hit videos wonders is because it is difficult to catch lightning in a bottle twice and recreate a video with massive buzz, (ask the Old Spice Guy about that one)

The same goes for Charlie Sheen’s retweeted message between Target and myself.

Of course, the same night of the Target retweet, I had another message was retweeted several times.

Will I have a Twitter message retweeted as much as this one?

For this to happen again, both Target and I are going to have another “Winning” person who loves Tiger Blood, Trolls and pressing retweet in the middle of the night.

3 Responses to The Night Target, Charlie Sheen and I Became “Winners” on Twitter