How I Used Craiglist To Find a Used Car 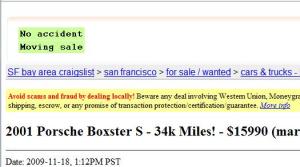 Well in 2011, the wheels are  still intact, but everything else has fallen off.

Nicknamed “Road Warrior”,  once white now rusty with speckles of white,  my Prizm has logged over 252,000 mile;  but it came at a cost with  leaking gas, spilling oil, a tank-like sound when it drives and it persistently shake like a chihuahua in those old Taco Bell commercials.

With my set budget of $4000, I  knew I couldn’t afford my favorite social media car on wheels the Ford Fusion, so  had to go another way.

First I bought Consumer Reports 2011  Used Car Guide, which is a great publication for anyone looking for a car.

The guide takes a look at the performances of automobiles for the past 10 years.

One of the cool things about the guide is that it has a section that lists the best cars for a particular price.  One of the cars that was listed as a best buy for under $4000 were 2001-02 Chevrolet Prizm.

I made a list of the top ten cars that had marks which would  fit in my price range, but at the end of the day, I decided to get another Prizm.

Now finding any Prizm in good condition is a hard task.

I couldn’t find any Prizms in  used car section of my local newspaper, so I used  online sites like AutoTrader and Yahoo Autos .

Although there were  quite a few Prizms for sale, three things would usually happen:

1.) The cars would be out of my price range.

2.) The cars would be sold by the time I made it to the dealer.

One day while I was  on Craigslist one day looking for a Virgin android phone, when on a whim I typed in Prizm with the maximum amount I would pay.

I was given listing of quite a few Prizms in my area, but two listings caught my eye.

As luck would have it, The 1998 Prizm was  only  block from old job, which was 10 minutes away from my house, ( I used Edmunds online to check out the 1998 Prizm, since it was a few years too old for the Consumer Reports Guide)

If I wasn’t looking for a car, I wouldn’t have never noticed the lot,  because it was  small and very nondescript.

The dealer told me he bought cars with low miles  from salvage places/auctions, fixes them up and sell them,  (When I arrived he was only selling 10 vehicles).

Although the Geo Prizm was a 1998 model, it looked pretty new and 62,000 odometer reading was legit.

Knowing the price of the  2002 Prizm, we haggled on the a price a bit, but we settled on %15 off  the sticker price, (thanks for tip Consumer Reports)

Before I signed anything, I asked if I could take the car my mechanic to check it out and he said yes, (thanks again C.R).

When my mechanic checked it out, he told me except for a few minor issues, the car was a good buy.

I told the dealer to give me a day to think about and that’s when I checked out the 2002 Craigslist Prizm .

Unlike the smaller dealer, this was traditional  lot full of cars and guys with same colored shirt named bob who were running around and answering phones.

One of the Bobs told me to check out  the Prizm and he would be with me in a few minutes.

When I checked out the 2002 Prizm, I didn’t know how to open the door, because the handle was broken off!

By the time I was able to open the door,  the inside of the car  smelled like smoke and there was over 184,000 on the odometer, (that little nugget was not listed on the Craigslist ad).

“Road Warrior” and I couldn’t drive out of that place enough! 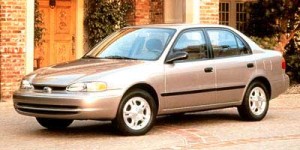 Today, I am the proud owner of the 1998 Prizm and very soon I will have to say goodbye to my beloved “Road Warrior”.

While, I’m not sure what I will name this car, but I never thought I would find it on Craigslist.

This is not to say that every car listed on Craigslist will be a good car, but Craigslist is great way for dealers and private sellers to promote their cars at little cost.

If you are a car buyer and you find one that is to your liking, make sure you get it checked it out by your mechanic.

If the dealer says no, then keep looking until you find a dealer that says yes.

I’m not sure if I will pile up 252,000 on this car, but the miles of online experience I gained looking for it will last just as long.